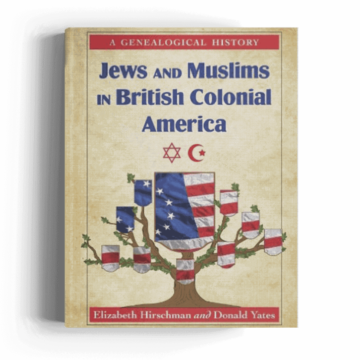 Jews and Muslims in British Colonial America: A Genealogical History

Americans have learned in elementary school that their country was founded by a group of brave, white, largely British Christians. Modern reinterpretations recognize the contributions of African and indigenous Americans, but the basic premise has persisted. This groundbreaking study fundamentally challenges the traditional national storyline by postulating that many of the initial colonists were actually of Sephardic Jewish and Muslim Moorish ancestry. Supporting references include historical writings, ship manifests, wills, land grants, DNA test results, genealogies and settler lists that provide for the first time the Spanish, Hebrew, Arabic, and Jewish origins of more than 5,000 surnames, the majority widely assumed to be British. By documenting the widespread presence of Jews and Muslims in prominent economic, political, financial and social positions in all of the original colonies, this innovative work offers a fresh perspective on the early American experience.