A new study published by Panther’s Lodge calls the history of America’s largest Indian nation “a polite modern fiction, one invented by ‘anthropologists and other friends.'” The phrase echoes a chapter from the work of the late Vine Deloria criticizing the white man’s habit of writing the Indian’s history for him.

Old Souls in a New World:  The Secret History of the Cherokee Indians

In this sweeping revisionist study of the Cherokee Indians, a scholar trained in classical philology and the new science of genetics discloses the inside story of his tribe. Combining evidence from historical records, esoteric sources like the Keetoowah and Shalokee Warrior Society, archeology, linguistics, religion, myth, sports and music, and DNA, this first new take on the subject in a hundred years guides the reader, ever so surely, into the secret annals of the Eshelokee, whose true name and origins have remained hidden until now. The narrative starts in the third century BCE and concludes with the Cherokees’ removal to Indian Territory in the nineteenth century, when all standard histories just begin. The ancient Egyptians, Greeks, Jews, Romans and Phoenicians have long departed from the world stage. The Cherokee remain after more than two thousand years and are their heirs. 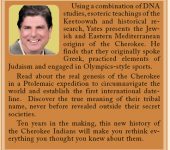 Donald N. Yates was born in Cedartown, Georgia. He attended Stetson University, University of Vienna, University of Freiburg, Duke University and University of North Carolina at Chapel Hill, where he earned a Ph.D. in classical studies with a concentration on Medieval Latin Studies. His books include The Bear Went over the Mountain, Los Lunas Decalogue Stone and Old World Roots of the Cherokee. With Elizabeth C. Hirschman, he authored The Early Jews and Muslims of England and Wales:  A Genetic and Genealogical History. He lives in Phoenix.